If you are someone like the author of this post, well, I found the original Lego Mindstorms kit of my son in the basement. Just looking at, closing my eyes, I went back 20 years ago when we first setup everything and played with. It was great ...

Now, with the box in my hand, I wondered if I still could set it up for my grandson. Of course, a lot of things changed since, a lot of new alternatives, new robots, new versions, on new platforms, yet I find somehow this piece of vintage ageless with all the basics there, great for my grandson to start with, for I could make it work...

So first I inspected the box and found 99% of the content intact including both the original CDs (some spare parts mixed with other Lego stuffs of my son), so that was the good news. The bad, well, the masterpiece of this system is the programming and downloading your program to the RCX 1.0 core computer (brick), so that you could make your robot or your rover do all the challenges you want to, but then, this required a Windows 95/98 computer, and where to find such these days ? Well I could turn to eBay, but what's the point in that ?

To cut to the chase, I succeeded, by the curtesy of this post I already mentioned; it was like a beacon for my project for I found all the hints necessary to get it work, though I needed to make some personal adjustments, I share here.

I won't focus on all the parts on the Lego Mindstorms system. They are well detailed in the post.

I will focus on stetting up the computer for programming and downloading the program to the RCX 1.0 device.

I tested several configurations including Windows7 PCs with USB to Serial COM devices running the Lego Mindstorms program as legacy, but the configuration which worked is this one:

Everything works like charm ! The RCX IR tower connects to the serial interface and is able to download programs to the RCX 1.0 core brick. Here is the test program allowing the Rover 1 to follow the black line on the test pad.

For anyone nostalgic like me, having a complete (or relevantly enough) set of the Mindstorms System 1.5 or later, I could offer support in setting up your computer as follows:

Installing Windows XP (even the SP3) on relatively modern computers with SSD drives wont work. XP doesn't recognized the drives so I succeeded since to install a computer with SSD drives in Windows 7 (you can still find Windows 7 images), install on top VMware Player 4.0 and get running the Windows 98 SE with the Lego Mindstorms program iso image as a virtual machine. 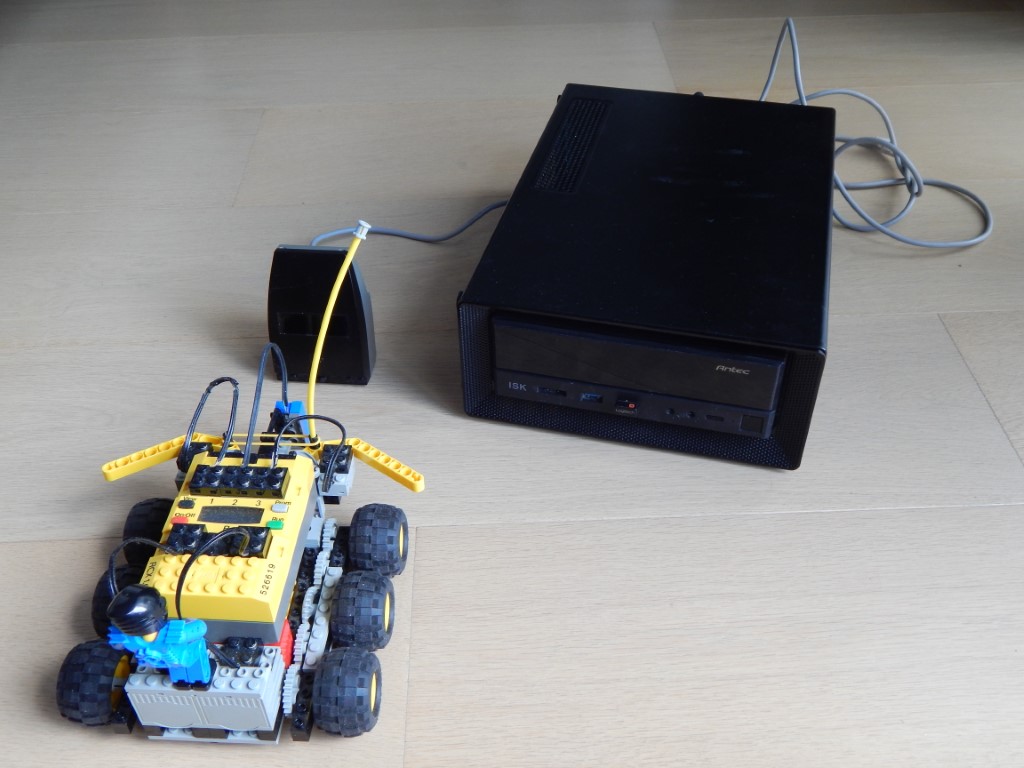 So, for anyone nostalgic like me, having a complete (or relevantly enough) set of the Mindstorms System 1.5 or later, I could offer support in setting up your computer as follows: